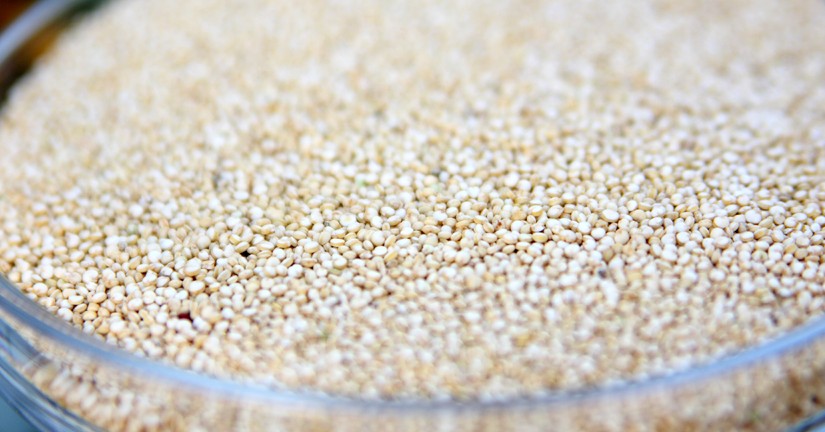 Quinoa, pronounced keen-wah, is fast becoming my favorite grain. This ancient seed, perhaps best known as the staple food of the ancient Incan civilization, was used by the Incas to supplement their diet of potatoes and corn. It was commonly referred to as the “mother grain” or “gold of the Incas”.

Quinoa is native to Bolivia and a relative of Swiss chard, spinach and beets. It is a nutritional powerhouse – just 1 cup provides 8g of complete protein (all 8 essential amino acids), 5 g of fiber, and is a high in iron, magnesium, B vitamins and omega 3 fatty acids.

Quinoa can be boiled whole and eaten like rice or used as a base for whole grain salads. Its soft texture and mild flavor blends well with any dish. It can be added raw to give crunch to breads or granola. Naturally gluten free, quinoa can be milled into a fluffy flour that works beautifully as a substitute for wheat in pancakes or muffins.

For years I have enjoyed cooking with whole quinoa, but had always shied away from using it for flour. Most information about quinoa mentions its bitter residue on the surface that must be rinsed before cooking. Rinsing certainly prevents it from being milled into flour. Recently, I tried milling quinoa into flour and I let me just say I was pleasantly surprised. Actually, I was not just surprised, but excited, to learn that the flour had no bitter taste at all, but in fact had a very mild, almost buttery flavor.  The flour was fluffy and light in texture, not at all gritty and produced soft pancakes and muffins with no need for additional starches called for in most gluten free baking.

The recipe below is a delicious savory pancake that reminds me of an old fashion Southern fried hoecake made with cornmeal. A little more light and fluffy and complex with the added ingredient, but the savory flavor is there.

Enter your email address to be notified of new posts