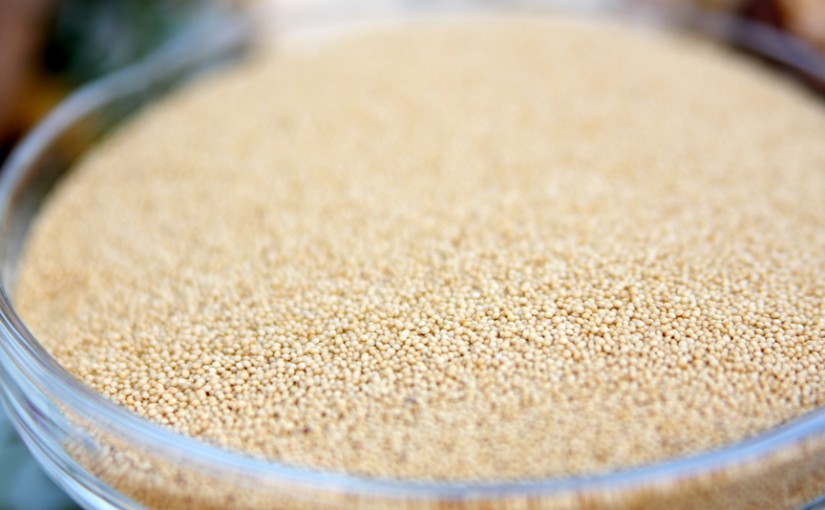 Considered a super-grain by many, amaranth is technically not a grain at all. Amaranth is the seed of a tall flowering plant with broad green leaves and bright colorful flowers. The plants can grow up to 7 feet tall and have thick tough stems, similar to the sunflower plant, yet the tiny seeds of the flower are only about the size of a poppy seed.  The seeds are usually white or cream colored but less common varieties might be red or purple. Amaranth adapts easily to adverse growing conditions and is extremely drought resistant. Its name comes from the Greek word, “amarantos”, which means “one that does not wither”, or “the never fading”, as the beautiful bushy flowers retain their color even after cutting and drying. The entire amaranth plant is harvested and used – the leaves are eaten as a vegetable, the seeds are used for food, and the flowers are used for decorations.

For several thousand years, amaranth has played an important role in various cultures around the world. In Asian cultures it was called “king seed” and “seed sent by God” as a tribute to its unique flavor and source of strength and nourishment. Perhaps the most well-known historical account of amaranth is its part in the Aztec civilization. Valued both nutritionally and spiritually it was believed to give the average man superhuman strength or turn a “weak man” into a “warrior”. Its reputation as a super food is not without merit and interest in this pseudo-grain is certainly being revived.

Amaranth is classified as a pseudo grain, along with buckwheat and quinoa, because although it comes from a different species of plants than other cereal grains, like wheat, oats and barley, it has a similar nutritional composition to other common grains.  Like other grains it is high in fiber and a good source of essential fatty acids. It is a good source of iron, magnesium, and phosphorus and an excellent source of manganese and vitamin B6. It has 3 times the calcium as most other grains and is the only grain with a substantial amount of vitamin C.

Amaranth is a protein powerhouse. It is considered a complete protein because it contains all the essential amino acids including lysine, which is usually lacking in most cereal grains. With a protein content of 12 to17 % it is comparable to animal protein, making it a great food for growing children and vegans.

Studies show that amaranth may have cancer preventing, cholesterol lowering and anti-inflammatory properties. Amaranth is an excellent source of dietary fiber, having 3 times the amount found in wheat. Some nutritionist are advocating amaranth to help fight obesity in children.

Amaranth is easy to grow but very tedious to harvest, so will cost more than most grains. It should be stored in a moisture proof, airtight container. Smaller quantities can be stored in the freezer if desired. Stored properly amaranth will keep indefinitely. Because of its small size, when milling amaranth into flour with an electric mill, it is best to pour the seeds slowly into the mill hopper. Some electric mills make a small grain attachment cup that allows you to pour all the amaranth into the milling hopper at once as it will slowly feed the seeds into the milling heads for you.

Amaranth is naturally gluten free. Amaranth has a complex range of flavors. Most describe the flavor as earthy or grassy, to light, nutty and even peppery. Traditionally amaranth was eaten as a breakfast porridge, popular in India, Nepal, Mexico and Peru. It is best cooked with other grains, using 2-3 parts liquid to 1 part grain, letting the alternate grain determine the cooking time. Using a strong flavored liquid, such as beef broth for a savory dish and apple or orange juice for a porridge, may offset the distinct flavor of amaranth. Cooked alone, amaranth has a very sticky texture which may not appeal to everyone. The sticky texture can be improved by using 6 cups (1.5L) of liquid for every 1 cup (250 mL) amaranth and cooked for 20 to 25 minutes. All of the liquid will not be absorbed but the amaranth can be drained and rinsed to remove the thick, sticky liquid. Because of its gelatinous texture, amaranth makes a great thickener for soups and sauces and can be added in the last 30 minutes of cooking time.

Amaranth is unique in that it can be popped and eaten much like popcorn. In fact, in Mexico, a popular, sweet treat known as alegria, is made by mixing popped amaranth with honey or sugar. To pop amaranth, simple heat a dry skillet on high heat until very hot. Sprinkle in about 1 tablespoon (15mL) of amaranth at a time. Shake the pan back and forth over the heat to keep the amaranth from burning while the kernels of grain pop.  The popped kernels of amaranth are of course much smaller than popped corn.

Milled into flour, amaranth gives a very moist texture to baked goods. Amaranth flour can be used alone in quick breads, such as muffins and pancakes, but again is best with the addition of ingredients like chocolate or citrus that can temper its earthy tones. For yeast bread, amaranth can be added to wheat to boost the protein content and nutritional value but since it has no gluten should be used in ratios of no more than 1:4 (1/4 cup (60 mL) of amaranth to 1 cup (250 mL of wheat flour). For a gluten free yeast bread, amaranth will work best combined with other gluten free grains such as brown rice or sorghum flours. Starches such as tapioca and arrowroot as well as xanthan gum will have to be used to provide structure to the dough for yeast leavening.  Amaranth is a food worth discovering and incorporating into any healthy eating menu plan. The muffing recipe below will soon become a family favorite.