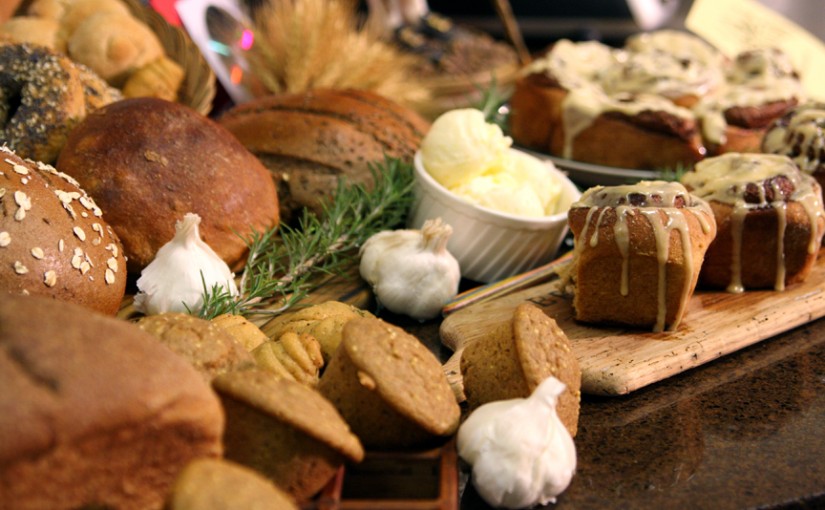 I am continually amazed every time I do research on a nutritional subject, that I am somehow led back to the incredible goodness of whole grains. Such is the case again.

With all the talk in the news about the dangers of radiation exposure, I was reminded of a book I read about 8 years ago. Diet for the Atomic Age was written by Sara Shannon, a nutritionist and researcher, who was becoming increasingly aware of the growing number of health challenges resulting from radiation exposure, not only high level exposure from nuclear fallout but also low level exposure that most of us experience daily.

In her quest to learn more on the subject, she found that much was written on the dangers of radiation exposure but little on protection.  Ms. Shannon indeed found data confirming that we can protect ourselves, but the information was both “scattered and sparse.” Her continued search led her to compile the information into one book. This past week, I have been rereading Diet for the Atomic Age, and I am compelled to share with you some information about whole grains and beans that I hope you will find encouraging. The information I wish to share is not exhaustive on the subject, nor is it intended as medical advice, and I do not necessarily agree with the author’s philosophical views. This book is not about milling your own grain, as the author makes no mention of it. Rather, it is an unbiased look at the health benefits certain foods can offer. I hope you find the information presented as enlightening and encouraging as I have.

After extensive research, Ms. Shannon found one fact consistent among the experts and research: food and overall physical health offered the best protection and recovery from radiation exposure. She discovered that there are naturally occurring components in food that can either chemically combine with toxic substances in the body or to prevent their uptake. Fiber is perhaps the most well known of these substances, but the others such as phytates, sulfur containing amino acids, calcium and iodine are just as important. She then lists the most abundant food sources of these substances.

I find it fascinating that whole grains are first on her list of protective foods. Not only do whole grains offer the protection of much dietary fiber, but they are also high in complex carbohydrates, B vitamins, iron, zinc, calcium and trace minerals.

She lists 5 ways that whole grains help to protect us:

1) Grains are low on the food chain, so they are less likely to contain the concentration of contaminants that are found in foods at the top of the food chain, such as meats and large fish.

2) The high fiber content and phytates found in whole grains are powerful chelators of toxic substances. Both fiber and phytic acid can bind with toxins, such as heavy metals, and remove them from the body through the natural elimination process.

3) The bulking factor of the abundant fiber found in whole grains shortens the transit time of waste from the bowels, therefore it hastens the removal of these toxins from the body.

4) Being neither very acid nor very alkaline, whole grains help us to maintain a more neutral pH range, which has been found to increase our resistance to radiation.

5) Whole grains provide vitamin B6, which is a necessary nutrient for a healthy thymus gland, a key player in healthy immune function. In addition, the high calcium content in whole grains provides protection against the uptake of radioactive strontium.  Whole grains are one of the riches food sources of vitamin E and selenium which, of course, are invaluable for preventing cellular damage caused by free radicals.

Ms. Shannon reminds us that whole grains, and not refined flour, offer this protection. She states that is it important to eat grains in their whole form, with the bran and germ intact, and only the inedible chaff removed. She confirms that once the whole grain is milled into flour the nutrients are quickly oxidized. She encourages the use of a variety of grains such as brown rice, millet, barley, corn, buckwheat, wheat, oats and rye and states that “for optimal health, at least half of every meal should be grains!”

Fresh vegetables are second on her list.  Vegetables in general promote health and are not only high in fiber, but vitamin C and folic acid, which are known blood builders.  Vegetables that contain sulfur have been found to have strong protective power against radiation. These include vegetables of the cabbage family: broccoli, brussels sprouts, cabbage, cauliflower, chard, kale, mustard greens, onions, parsley and watercress. The sulfur is contained in amino acids that are found in these particular vegetables. These sulfur containing amino acids function as antioxidants, free radical deactivators and poison neutralizers. They have a high affinity for radioactive substances and for toxic heavy metals. They bind with them, and in this form, the poisons can be excreted in the urine. So mother was right: EAT YOUR VEGETABLES.

Next on her list of important foods are dried beans. Phytates, including phytic acid, are phosphorus compounds that are found in most plant foods, but are especially abundant in beans, peas, and whole grains.  Phytates have come under attack in recent years by some teachers advocating the soaking or fermenting of grains and beans before consumption to break down the phytate component. It is believed by some that phytates, because of their ability to bind with metals, bind with valuable minerals such as calcium and iron, creating deficiencies in the body. In reality, however, phytates have the property of combining with toxic and radioactive elements and forming compounds that are eliminated through the bowels.

Protease inhibitors are another controversial component found in beans. Protease inhibitors can decrease the absorption of injurious proteins, thus contributing to cancer prevention. The author acknowledges the potential of phytates to bind with certain nutrients and protease inhibitors to prevent protein absorption but states that these whole foods have an ample supply of the necessary minerals and proteins, and a healthy body more than compensates and is capable of obtaining sufficient proteins and minerals from these foods. She suggests that, if digestion is poor, and someone is not accustomed to eating whole foods, especially beans, they add dry beans slowly to the diet until the body is able to adjust and digestion improved.

Experts agree that one of the greatest concerns after the release of nuclear contaminants will be radioiodine carried downwind for hundreds, even thousands, of miles. This contaminant can be absorbed easily by the thyroid gland. Saturating the thyroid with supplemental iodine will prevent the uptake of the radioiodine. Sea vegetables are a great source of iodine. We carry CGF Chlorella 500 mg, by Nutribiotics , a highly digestible and absorbable, super green aqua cultivated plant food. It is naturally high in iodine. Chlorella is a super energizing and alkalizing plant food.

Also mentioned in the book were foods to avoid. Of course at the top of the list were refined and processed foods.  Sugar should be avoided in food as well as drink. Sugar robs your body of calcium, which is stored in the bone marrow, and the body will replace it with radioactive strontium, which has a similar structure to calcium.

Sara Shannon sums up her findings with this statement:  Ideally, grains-that is, whole grains, not (white) flour products-should make up at least HALF of your daily diet.  For maximum benefit in the case of a radiation accident or spill of water increase the proportion of grains to about 70%!  Also increase the amount of miso (or other fermented or cultured food), sea salt (such as Redmond’s All Natural Sea Salt) and sea vegetables in your diet, and avoid sugar entirely.  (Emphasis and parentheses mine.)

Finally, I want to reiterate a common theme throughout the book: a healthy body is one that will best be able to combat the effects of radiation exposure. It is easy to become discouraged about the prospects of future nuclear accidents or even the current daily exposures to radiation. It would be easy to feel hopeless since we can not control or prevent any of these events from happening. But my desire is always to encourage. I hope you see that there is something you can do to protect yourself and those you love. We must continue in our journey to return to a diet consisting mostly of whole grains and the foods God has given us to promote health and vitality. But good health does not happen overnight. The best time to protect yourself from radiation exposure or any health challenge for that matter, is not when a big event takes place but NOW-eating the foods that will promote optimal health: real bread and real food.